Cavaion Baumann, a leading sideloader manufacturer, has recently opened a state of the art paint facility on site at their factory in Cavaion, Italy. Part of a major planned investment to their main production line, Cavaion Baumann has increased their efficiency and allowed for significant increases to production volume. 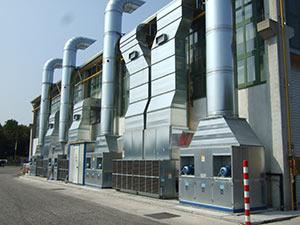 The old paint facility proved to be a major limiting factor in the number of trucks that could be produced creating a significant bottle-neck in production. In addition to increases in production volume by nearly 300%, allowing for the finished painting of at least three truck per day, the quality of painted trucks has risen immensely to allow for a more durable and attractive final product.

The new facility consists of three stand-alone paint booths. Two were designed to accommodate most standard sideloaders the factory produces and a third, extra-large booth capable of painting the larger sideloaders that have have made Cavaion Baumann a major player in the sideloader business.

This investment, as well as future plans at the factory, has greatly influenced Cavaion Baumann’s already superior position in the world sideloader market and cemented their commitment to providing customers with a quality product.